Gaurav and I managed to squeeze in a little getaway without the kids before we leave India. I hadn’t been to Goa in nearly 15 years save for our wedding which was such a whirlwind. Gaurav hadn’t really experienced the real Goa in his younger years because of a bike accident on his second day in Goa. So, we were excited to head (back) to one of India’s biggest party places! And a party it was! By the end of our first day there, we’d each consumed 10 drinks…We landed in time for a late lunch and headed to the famous ‘Souza Lobo’ for some Goan prawn curry and calamari recheados washed down with local beer. After checking in to the Le Meridien, we spent the rest of the afternoon at the pool enjoying bloodies. After getting dressed for the evening, we headed to the hotels rooftop where Gaurav was thrilled to get his favorite ‘double apple shisha’ which we paired with rose. We watched the sun set into the Arabian Sea with the beats of a local DJ, also known locally as a ‘sundowner’. Next up, Gaurav wanted to experience a traditional beach shack which Goa is famous for, so we headed to Brittos which has many memories for me. While it’s become more ‘upscale’ than I remember it, it still had a similar vibe and we enjoyed dipping our toes into the sand as we ate some spiced calamari cooked with onions and peppers and drank some local port wine (Goa has strong Portuguese influences since it has once ruled by them). It was karaoke night and we decided to sing a fairly off-beat rendition of ‘wonder wall’ before we escaped from Brittos and walked down the beach passing tens of other beach shacks, each playing their own dance music. We stopped by ‘Titos’, a club that is another Goan institution. It was early but we got a couple of drinks and heard some old EDM favorites from the 90’s before heading to Fiesta for dinner. A romantic candle-lit restaurant, Fiesta didn’t disappoint. We then hopped into a taxi to Cohiba where we spent the rest of the night. I loved the 10-person live band and we joined in the dancing as we continued to imbibe fresh fruit mojitos. 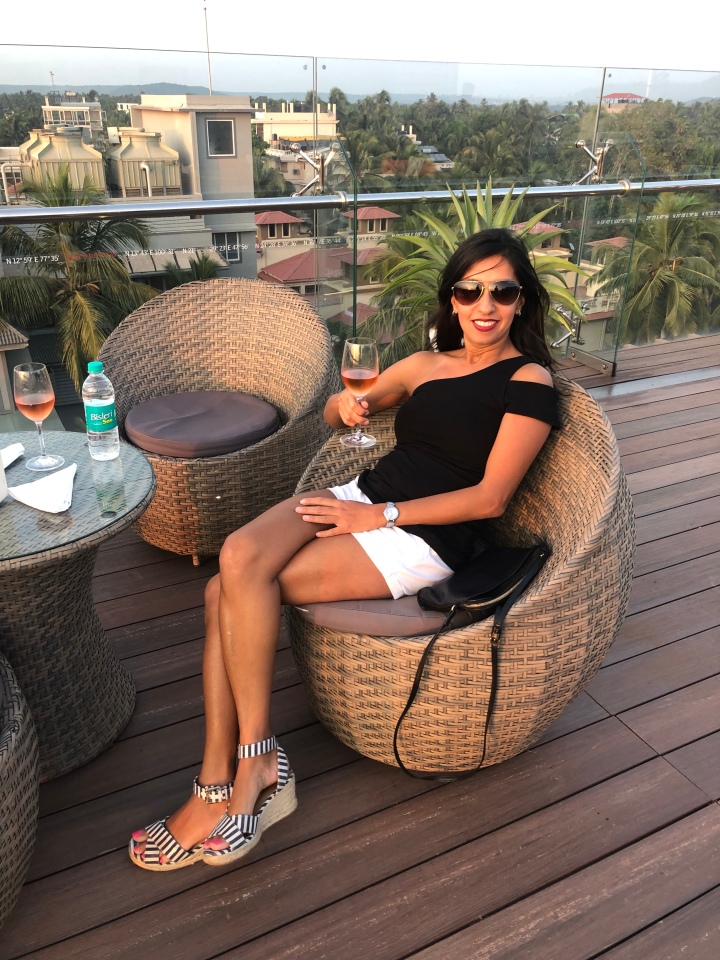 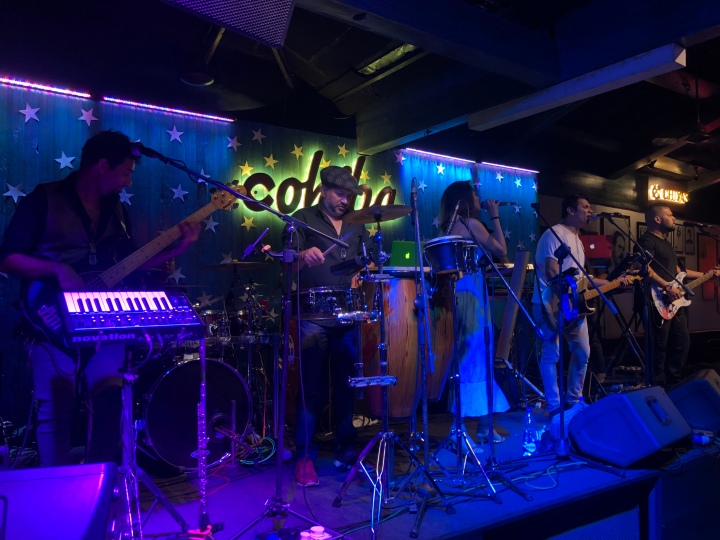 The next morning, we enjoyed a lavish breakfast consisting of made to order dosas, parathas and other delicious Indian staples. We then headed over to the W (a large wedding block forced us out the previous night but they made up for it by upgrading us to a fantastic 2-bedroom villa overlooking the beach). Check in consisted of two bottles of beer and a buggy ride to our villa. We headed straight to the pool and then, still relatively hungover, decided it was time for a short nap. When hunger called, we made way to a late lunch at Olive, a hip restaurant set on a cliff overlooking the ocean. The Goan chorizo and mozzarella po-boy and calamari 3-ways including a Japanese-inpired sesame-panko crusted version were delightful. We caught an ‘auto’ back to the hotel and lounged at the hammock in our villa for a bit. We later strolled down to the beautiful Rock pool for the sundowner. This venue is a scene due to its beautiful setting over a cliff with a DJ, shisha and over-the-top service. The best from all over Goa apparently flock to the W rock pool for sunset and we were able to snag one of the best spots. What a great experience it was! The sky exploded into a myriad of colors as the sun journeyed down into the sea.

Once it was dark, we headed over to a Rudy’s, a bar and grill that a friend of mine had opened just a few days before. I’d forgotten that it’s not quite to easy / safe to walk in india after dark and the narrow alley made me queasy. I was relived when we arrived! We enjoyed some delicious home-made Beef tacos, prawns and chicken wings with bourbon cocktails for Gaurav and margheritas for me. Next up, we had reservations at Gun Powder which had just been ranked the top 20 restaurant in India. The Andhra prawn curry and stir fried okra with flaky parathas and appams did not disappoint! We ended the night back at the lobby bar of the W, fairly exhausted!

Another fantastic breakfast greeted us the next morning. We then climbed to chapora fort which offered stunning vistas of the W and the Arabian Sea. We ended with a walk on the beach before retreating to our villa. We hit the rock pool when it opened and after a couple of beers, we ended our stay with lunch back at Olive! Thank you to the grandparents for caring for the kids while we got some couple time together.